I like this project – a random name generator Display. Okay it’s conceptually simple and has probably been done a few times before, but it has wide application… 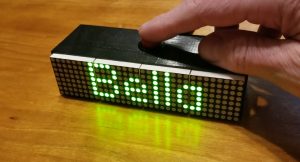 In this lockdown learning age, the Arduino team have highlighted the work of a teacher to create an Arduino device that picks a random student to call on in class. It takes the effort, or any in-built bias, about which pupil to select next.

This teacher created an Arduino device that picks a random student to call on in class: https://t.co/vwSruVDmK0 pic.twitter.com/a7C7ioXZbc

Using an Arduino Nano to drive a Maxim MAX7219 display module, it’s powered by a rechargeable 9V battery via a buck converter, writes the creator onemywaybackhome.

You can read more here, on reddit, and view the code on PasteBin.

You simply enumerate the class members as constant strings within the variable classRosters[numberOfClasses][maxClassSize]. Then the options are copied into a shuffled array and cycled through to pick out at a random stop. (I would’ve just randomised access to the original array, but maybe I am missing something.)

What immediately also springs to mind, for me, is using it as a dice – or die – simulator. In the lockdown age, of table top gaming, as well as home learning, dice rolling off the table is a bit if a pain… (First World problem, I know)

What do you think. What would be other possible applications? Leave a comment below.

Device to pick a random student to call on in class. from arduino