How about an electrochromic Display? 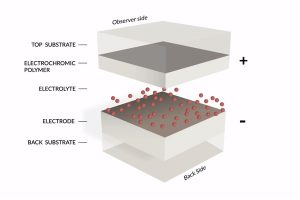 This is a new spin on an existing technology, characterised by low power consumption and image retention for tens of minutes after power is removed.

It works by driving ions in and out of the visible surface to change its colour, using a low-voltage electric field. 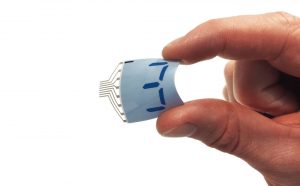 In this case, Ynvisible has a reel-to-reel process that, as standard, yields grey on a grey background when a display segment is off, turning to blue against the grey background when it it activated. A typical substrate is 120μm thick – it can be thinner – and it will bend with a 10mm radius.

Nominal contrast is low, but the segments are clearly visible – in sunlight too because the technology is reflective rather than emissive. “The typical contrast ratio metric is not as high as the actual colour change,” company marketing head Felix Karlsson told Electronics Weekly.

Displays have to be segmented – one electrode per segment – although the company is looking into a passive matrix version.

A ~180ms pulse of up to 3V of suitable polarity is needed to turn on or off a segment – called ‘colouring’ and ‘bleaching’. Pulses have to be used – continual connection to 3V is not allowed. Power consumption works out at below 1μW/cm2. 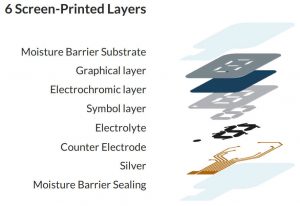 When turned on by a pulse, the segment then gradually drops to around 80% of its initial colour over the next 15 minutes, then tails off to 50% over hours. “In room temperature we recommend a refresh pulse every 10-15th minute, and above 60°C it could be as often as every minute to maintain full contrast,” said Karlsson, who describes this behaviour as ‘bistable’. He added that up to a week of display is possible with an optimised layer stack. Operating range is -20 to +80°C.

“We have drivers for prototyping purpose but the driving is very application specific and usually our clients can use their existing solution to drive the display,” said Karlsson.

An Arduino library is available for waveform creation. 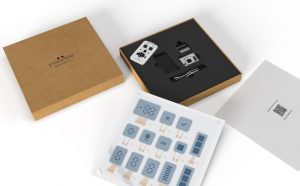 An evaluation kit of displays and actuator boards is available, with more on the way.

This technology was formerly by Swedish company Rdot, which was co-founded by Karlsson, and bought by Ynvisible Interactive of Vancouver. The company has prototyping capabilities in Linköping, Sweden and in Almada, Portugal, roll-to-roll production in Sweden, and R&D in Freiburg, Germany.

Scroll down here for the arduino library,

The eval kit is here.