Smart cities: Is it good to upgrade embedded displays?

The IoT is taking smart devices everywhere, and the embedded Display is a crucial element, as David Roberts explains 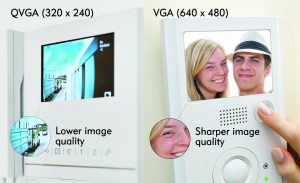 The difference in Display size, comparing QVGA to VGA

It is 13 years since the first-generation iPhone was launched, at the start of the smartphone revolution. Profoundly influencing the way we live and work, it has changed everything from keeping in touch with friends and family, to making payments and using financial services, controlling our homes and entertaining ourselves with video and gaming.

More than this, its influence has completely transcended the mobile market and revolutionised the way we interact with technology everywhere.

Thanks to smartphones, our expectations of equipment such as industrial control panels, retail point‑of-sale, vending and ticketing machines, cookers, washing machines, coffee makers, door-entry systems and office equipment have been transformed.

The trend is now ingrained. Every new model offers sharper graphics, more vivid colours, more fluid animations, more natural gesture-based controls – and markets expect similar vibrancy, immersivity and immediacy to permeate into all the other devices we interact with at home, at work and on the move.

Upgrading the display to support a crisper, clearer user interface can make leading-edge embedded systems safer and easier to use, as well as more attractive and marketable.

What can be gained by changing the display? Much of the equipment we interact with on a daily basis, such as smart industrial machinery, domestic appliances, security panels, vending machines, is becoming more complex and feature-rich. With more choices on offer, older displays and user interface designs may not be able to convey the available options clearly.

A crisper display with better graphics or sophisticated animations can help users understand more quickly and easily than text-based designs. For industrial equipment in particular, it can make it safer to use. It can also simplify the provision of multilingual flexibility.

Also, people just like what’s new. Today’s microcontrollers (MCUs)and application processors provide significantly more processing performance in relation to price and power consumption than in previous generations. Similarly, larger and higher-resolution displays are becoming more affordable. It can make sense to take advantage of these changes simply to deliver something fresh to the market that will gain attention and increase share.

Anders Electronics receives many requests from customers to help upgrade and revitalise the user interface of successful and established products. They may want to increase the display size to convey extra information, or simply boost the user experience by replacing, say, a 3.5‑inch QVGA (320×240 resolution) with a 320×480 HVGA or 640×480 VGA unit of the same size, or replace a 4.5‑inch 240×400 WQVGA with an 800×480 WVGA. Applications that feature a 4.3‑inch display are similarly moving from 240×400 WQVGA, typically to WVGA at 800×480.

The same display size is often adequate for the application and, indeed, redesigning to incorporate a larger display can be expensive. Increasing the display resolution can be a more cost‑effective way to deliver a boost in your target market.

With the higher resolution comes opportunities to redesign the entire look and feel of the front end to take full advantage of the new display capabilities. Alongside the shift towards higher resolution, there is often a desire to increase the brightness for a sharper, more vivid user experience.

Upgrading is usually not as easy as simply connecting a new display. Some re-engineering of the embedded system is almost always needed. 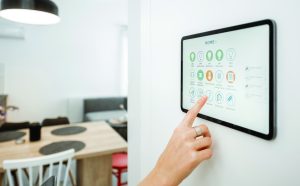 Controlling home with a digital touch screen panel installed on the wall. Close-up on a screen with mobile application for managing smart devices

Typically, RGB displays are the largest and most sophisticated units suitable for use with an MCU, although some high-end MCUs integrate a DSI port.

The display resolution and colour gamut influence the number of pixels per frame and the number of bits per pixel, which must be considered in relation to the MCU’s on-chip RAM available for frame buffering and the maximum possible frame-refresh rate. A high frame‑rate is desirable to ensure smooth, fluid animation, but may be limited by the speed of the MCU and the type of interface.

The total number of bits per frame includes not only the bits-per-pixel data but additional bits associated with horizontal and vertical syncs and front‑porch/back-porch, and extra RAM is usually needed to prevent unwanted visible effects such as tearing.
The required storage could exceed the on-chip RAM density of some MCUs but adding external RAM increases the system complexity and bill of materials cost.

An OEM design team would typically start with their creative vision for the front end of the product; the look and feel that differentiates it against others in the market. The subsequent engineering effort is about creating the system design to realise that vision.

Taking into account the demands of the user-interface design, such as the colour depth and the speed and complexity of any animations, decisions need to be made about the MCU features and performance, and the size and resolution of the display.

If the legacy MCU cannot deliver adequate visual performance with the desired display, changing to a higher‑specification MCU may be possible. Microcontroller manufacturers are continuously introducing new devices that offer higher performance with lower power consumption, and it pays to keep abreast of what the market has to offer. Similarly, as far as memory is concerned, the trade-off between read and write performance, density, and price continues to improve in the engineer’s favour, enabling designers to achieve the effects they need within acceptable limits on overall power, size and cost.

Alternatively, a bridge chip or a dedicated graphics controller could provide extra frame-buffer RAM or to convert to an interface such as MIPI‑DSI or RGB.

It is worth mentioning that the way people prefer to interact with equipment such as POS terminals and ticketing machines is likely to change, following the COVID-19 outbreak, so introducing a touchscreen or gesture control could be a smart move when upgrading the display. Touch controllers are commonly integrated in a variety of MCUs, and touch displays made with standard or anti-microbial glass are readily available.

Mordor Intelligence identifies consumer electronics as a significant market, as touchscreens are adopted for mobile devices, tablets, laptops, and PCs as well as wearables (smart watches and smart bracelets). In the home, they are used in white goods (washing machines, refrigerators). They are also used in healthcare, retail and automotive products.